"Pick Up Some Rare Spirits......
We’ll admit to some inner-Melbourne snobbery with this place. The first time we walked into Olinda Cellars, we weren’t expecting very much. But daaaaamn were we proven wrong. The range in here is as good or better than the best boutique cellars in the CBD. You could spend a happy 30 minutes just working your way through the craft tinnies (some of which we’d never even SEEN before). They also have a fantastic selection of local and imported whisky, gin, rum, vodka and wine (label and cleanskin). Olinda Cellars also broker their own collection of rare and vintage wine—so if you’re in the market for something special, get chatting to the staff behind the counter." 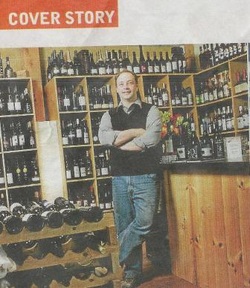 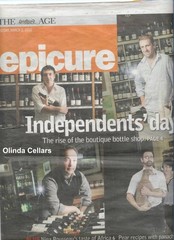 Where everybody knows your name.......
Some smaller bottle shops are cultivating customers who want more than a "bargain" from the big stores, writes Jane Willson.

"ROSS Wilson (of Olinda Cellars) has something of a party atmosphere at his place most Fridays. He opens a few choice bottles of wine and friends drop by for a drink. Sometimes it's just acquaintances, or people who've heard about his gatherings, and often it's the first stop before they head to a restaurant nearby. No big deal there, really, it is Friday night. Except that Wilson's place is not his home, it's his wine shop in Olinda. And this is not your average softly-softly hard sell. The tastings started as a way for Wilson to show off his new babies, but it's more than that now. It's a ritual. Some regulars even throw their own wine into the mix. ....."A 900-strong mailing list, a regular clientele within a 5 kilometre radius, and a reputation that draws new customers from well beyond, especially for regular wine dinners held at local restaurants.

"In Olinda, on the Mount Dandenong Tourist Road, is the Dandenong Ranges best wine store, Olinda Cellars. Run by Ross Wilson, a former wine broker and a man obsessed by boutique and hard to get cult wines, the attractive shop with its wooden floors and cathedral ceilings, stocks mainly Australian wines and boutique beer from microbreweries across the state and country.

There is a strong Yarra Valley focus in the store’s wine mix with a good showing from some of that region’ prestigious smaller wineries. Ross’s other specialty and source of pride is to be able to source “almost any wine” through his knowledge and contacts from six years as a wine broker.

Ross is a local boy who dreamed about opening a shop like this in the area and has not only fulfilled his dream but has met with great approval in the Dandenongs too. Talk to any local wine buff about the arrival of Olinda Cellars in the area and the happiness and relief in their voice is palpable"